What Are The Best Resources To Learn Jyotish or Indian Astrology 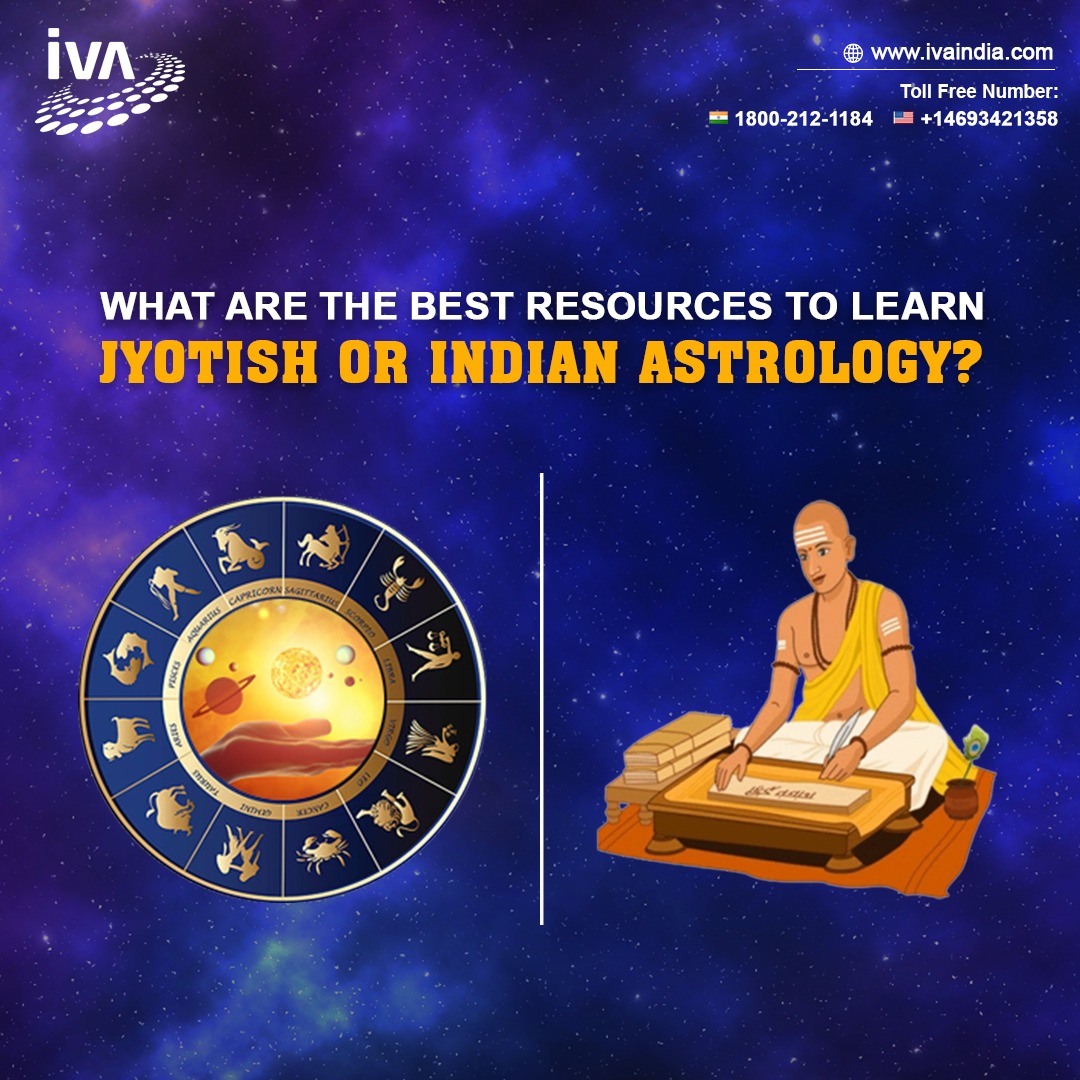 Ancient Indian science that explains planetary motions and positions concerning time and their effects on human beings is known as Vedic or Indian astrology. Future Point allows you to join the Vedic Astrology online course and master this ancient subject from the comfort of your home in the modern digital world, especially in our current society. Indian astrology is divided into different parts based on planets and 27 constellations.

To easily understand, all the planets are determined by basic nature. These planets are governed by five major elements of nature, i.e., air, water, earth, fire, and space. As per the nature of these elements, all the stars and planets fall under the system of astrology. This system helps us to learn and understand the concept of astrology. In India, you can find so many schools of astrology online, and you can also find the best astrology online courses.

How To Know About Different Signs Of Astrology?

To understand these signs and how the planets in the house affect an individual, we should know about the basic elements of nature, known as 'Panch Tatva.' All the stars, planets, human beings, and material on earth fall under these five major elements. Earth life is also through these major elements. Studying astrology charts or preparing birth charts is equivalent to studying science, as much of astronomy is involved. Its interpretation is based on established guidelines if a person's birth chart contains multiple planets representing various aspects of their life, such as their mental and physical capabilities, professional partnerships, marriage, children, challenges, etc.

The Creation of Astrology

One question usually comes to mind: "Who created astrology?" This question is still unanswerable because we say that or we give the position of astrology as a Vedanga, which refers to the part of our ancient Vedas. Many people claim to be experts in Vedic astrology and Vastu today. Still, to understand the true & goal-oriented concepts of these divine occult sciences, one should only put their trust in the best, who have a track record of excellence in such occult domains.

Future Point cordially invites you to begin your sacred journey of learning Vedic Astrology, Vastu, or even other amazing branches of occult sciences. Learn from experts who are unmatched and true professionals who are renowned for imparting the best occult education in India and have the power to completely transform a student's life. The subject of astrology is as ancient as Vedas, which has still not been clearly defined as who created or wrote Vedas.

On its mathematical components, it is apparent that the Vedas provided clear calculations regarding the study of planets, constellations, and other celestial bodies in ancient times, known as astrology.

The number of astrology manuscripts written by Indian masters is over one lakh, and information regarding the outcome is only now becoming available. Initially, arithmetic and astrology were viewed as one subject or synonyms, but later, they were divided into three categories.

The very first one of them is Tantra or Siddhanth; its primary goal is to use mathematics to ascertain the knowledge of the motions of the planets and constellations. This is important because the primary function of astrology is the calculation of the planets; without an understanding of their position and motion, no one can predict how these planets will move in the future and how they will affect people's lives.

The second item listed in this section is the horoscope. It has three subdivisions, including Jatak, Travel, and Marriage, and it provides information about a set of Rashies for anyone related to those Rashies.

The third is Branch, the detailed section with information on forecasts, symptoms, and projections.

Skandhas, or Samhitaparga is the person who is knowledgeable about these three Tantras, Horas, and Shakas.

Tantra primarily consists of two parts: one in which the planets' positions and other relevant topics are calculated, and another in which the significance of the creation's initial round of ideas, the making of yantras, and the computation of time are preserved. One of the traits of siddhant tantra and Karana is the concept of planetary mathematics, which cannot be kept separate at all.

Karan is the name given to the tantra that comes from Madhyayugin and which comes from any Ishtashok.

There is no distinction between these three if we evaluate things solely from the perspective of planetary mathematics. The siddhant tantra or the Karana Granth discusses the concept of algebraic geometry.

The Indian Sages revealed to humanity the ancient and sacred occult knowledge known as Jyotish or Vedic Astrology. This divine science has been employed as a powerful instrument to decipher what the planets and stars hold up for a person since the beginning of time. A learner would comprehend the idea of locating solutions for problems brought on by poorly placed planets in the horoscope by understanding Vedic Astrology.

Similarly, if one chooses to take an online Vastu Shastra course, they will master the highly complex ideas of the science of Vastu as outlined in the sacred text "Vastu Shastra," which contains the knowledge of Vastu.

An astrologer can anticipate a person's life trajectory using the study of Jyotish or Vedic Astrology since the nine celestial bodies or nine planets in the cosmos that contain that person's karmic record have already made their decisions.

The planets merely show a person the outcomes of the karma they have amassed throughout their lives. Every planet is given a particular set of karmas from a person's karmic account. Each planet displays the effects of those underlying karmas at a specific time throughout that person's lifespan.

Because we never stop creating new karmas, the cycle of karmic consequences keeps going with each new birth we have!

An astrologer interprets the nine planets' positions in a person's horoscope or Kundli and determines the outcomes they are likely to bring about in that person's lifetime in areas like education, career, marriage, childbirth, health, etc.

Regarding teaching and performing occult arts like Vedic Astrology or Jyotish, Future Point is considered the undisputed authority. The extraordinarily gifted experts at Future Point specialize not only in Vedic Astrology but also in various other esoteric sciences that are highly potent and have an impact on human life that goes well beyond what is commonly understood. A person can make the best use of this knowledge to make important life decisions that would minimize the harm indicated by planets that are poorly placed in the horoscope. At the same time, maximize the positive effects of planets that are well placed once they have a clear understanding of what various planets are signifying for them according to their placements in their horoscope.

Vastu, which is essentially the divine architectural science of the universe and deals with the behavior of forces upon & inside a physical structure, is one prevalent & profoundly life-altering occult science aside from Jyotish.

One can make no better investment than funding their education, which can enable them to know what their future holds. One should exercise extreme caution when choosing a Jyotish course since occult sciences should only be learned from experts who have dedicated their lives to studying the sacred occult sciences that our ancient Sages revealed thousands of years ago.

Additionally, Vedic Astrology offers highly efficient cures for problematic planets in the horoscope that can calm them down and potentially lessen or even eliminate their harmful effects.

Because a disturbed Vastu attracts malefic energies and causes financial losses, health issues, accidents, legal issues, and various other obstacles in the lives of people who come into contact with that home or commercial property. Knowing the correct Vastu for a house, flat, apartment, or commercial property is crucial. It will be better if we take the help of Vastu shastra before any construction.

Therefore, it is wise to learn about Vastu online from the Best Astrologer and incorporate its wisdom into your life to drive away evil spirits from your home or place of business. It draws in benevolent cosmic energies that will foster success, wealth, good health, and harmony in your life and your neighbors' lives.

Learning by online resources is quite simple and accessible nowadays. The internet is available everywhere; it does not matter where you are. You can easily access knowledge about any courses of astrology, whether it is horoscope, Vedic astrology, western astrology numerology, or palmistry.