Vedic astrology (Jyotish): What Is It and How It Is Different from Western Astrology 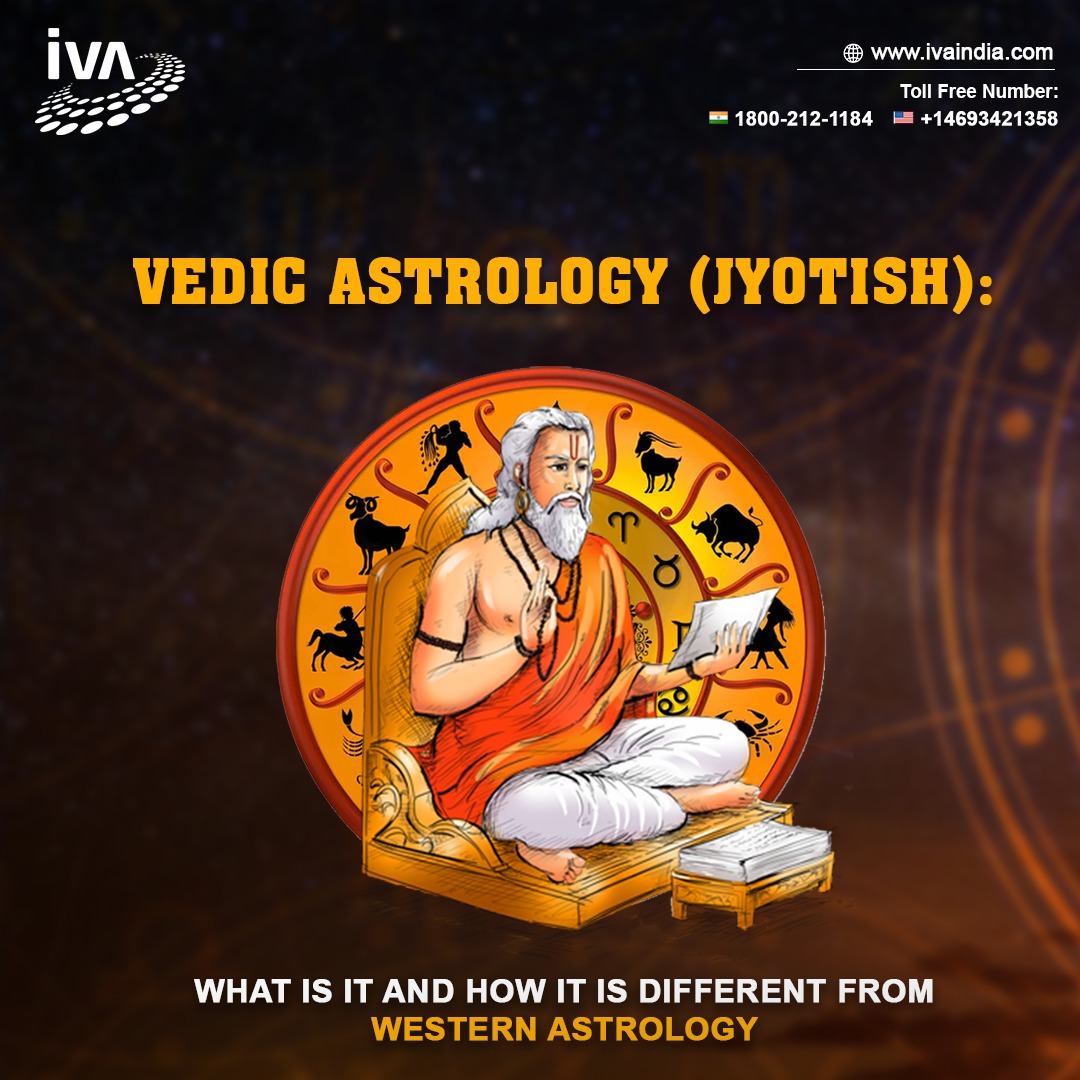 Know About Vedic Astrology In Detail

All the planets in these 12 zodiac signs can be calculated, and every person in life can be identified as a fixed zodiac and can also be told about it with the same help. We can also know the person's nature and get the solution based on these zodiac signs.

The word "Vedic" comes from the word "Vedas," which means "holy knowledge" and refers to a sizable collection of religious writings that dates back to ancient India. Vedic astrology has its roots in these sacred writings, known as the Vedas, and is also referred to as Jyotish, which means "light" in Sanskrit. The primary texts are thought to have been composed by Bhrigu, a sage regarded as the founder of Vedic astrology during the Vedic period.

Vedic astrology has a branch known as Muhurat astrology that you can use to find the most auspicious dates to do something like a major life event, for example, to get the best results. Vedic astrology explains planetary motions and position concerning time and space and their effect on humans and all other entities on the planet Earth. Vedic and Western astrology are two different but somewhat related astrological systems. You can find the best astrology online course.

The 12 zodiac signs are the same in Vedic and Western astrology, emphasizing time and space. Where they diverge is in their perception of the constellations' locations. The dates of each zodiac sign also change, almost by a full sign. For instance, depending on your exact birth date, Western astrology is a method of forecasting developed to create a horoscope for a specific minute, such as a person's birth. The equatorial zodiac, which is controlled by the equator points, is used.

Western astrology is based on the movement and approximate locations of celestial bodies like the Sun, Moon, and planets, which are arranged according to their parallel-angled graphic positions. They can also be identified by where they are located in homes. In astrology, there are 12 zodiac signs, points, houses, and "house positions of the birth chart." Interested person can also do the best online Vedic astrology course.

Western astrology, in contrast, is associated with the tropical fixed zodiac system and primarily depends on the movement of the Sun. On the other hand, Vedic astrology is based on the sidereal zodiac system and calculated and observed in the sky in connection with the constellations. It also depends on the Earth's tilt on its axis, the four seasons that depict the Sun's motion, and the equinoxes and solstices.

It is another distinction between the two systems. Both astrological systems have merits and values of their own and are equally potent; neither is superior or more accurate than the other. Both are now frequently cited by people to support their cosmological conclusions. Vedic astrology is a complex astrological system with many nuances, much like Western astrology. Still, it's worth exploring if you're keen to learn more about yourself or want to utilize it to plan for a successful future event. While Western and Vedic astrology has advantages and is similar in specific ways, the Vedic system is more sophisticated. Although all astrological systems interpret planetary motions similarly, Vedic astrology offers an incredibly complex calculating method that yields detailed data. By drawing on the sister discipline of Ayurveda, Vedic astrology likewise adopts an interdisciplinary approach and provides a broader perspective.

Jyotish and Ayurveda are sibling sciences that descended from the same massive Vedic knowledge tree. However, there are some essential notions that both of these fields share; therefore, their relationship is not just historical. Vedic astrology is founded on the idea that the human body is composed of five components, just as Ayurveda. According to their ruling element, the 12 zodiac signs of Vedic astrology are likewise divided into categories, and the characteristics of these elements are represented in each sign's unique personality characteristics. For instance, the primary component of the Aries and Leo signs is fire, mirrored in these people's fiery personalities.

There are 12 zodiac signs in both Vedic and Western astrology, although they view constellation positions differently.

The sidereal zodiac, on which Vedic astrology is founded, is a system in which planet positions are determined based on where they are observed in the sky about constellations. On the other hand, the tropical (fixed) zodiac is used in western astrology. This system is based on the four seasons, which stand in for the motion of the Sun, the equinoxes, the solstices, and the tilt of the Earth's axis.

Vedic astrology is based on the sidereal zodiac, a system that assigns planet positions based on where they are seen in the sky concerning constellations.

Some believe Vedic astrology is a more trustworthy and accurate prediction since it is based on the principles of nature. While Vedic and Western astrology has advantages and mostly overlap, many people today opt to switch between them to strengthen their conclusions.

Western astrology is a forecasting method developed for creating a horoscope for a specific minute, such as a person's birth. The tropical zodiac, controlled by the equator points, is used.

Western astrology is based on the movement and approximate locations of celestial bodies like the Sun, Moon, and planets, which are arranged according to their parallel-angled graphic positions. They can also be identified by where they are located in homes. In astrology, there are 12 zodiac signs, points, houses, and "house positions of the birth chart."

Today, everyone is interested in learning more about this enigmatic topic and eager to learn about the prediction. Because it is common for people to know when they will be successful, when they will land a good job, and when they will likely get married. To acquire this kind of knowledge, you must consult books and put a lot of effort into learning about astrology, even though it is not particularly difficult in this forward-thinking and contemporary age.

The first resource is a book that you may pick up that was authored by a renowned astrologer; it will undoubtedly greatly assist you. If you want to learn about Jyotish vidya for your purposes, you can read whenever you have free time and without having to go to a formal institution.

You can use the second tool by allowing internet services on your mobile device. To learn anything, we act just like students because humans are the only creators in this universe with the ability to understand and seek to use this power to make our lives more comfortable. Humans are also students forever because they constantly learn, so don't be afraid to learn. Many students are taking online classes, helping them perform better in their educational lives.

The third resource to learn astrology is through the educational system. Numerous colleges in our nation and around the globe offer astrology science as a subject, making it better for students who want to become astrologers in their careers. These colleges also provide study materials for professional courses. And pass the exam after completing all the courses so you can receive your professional astrologer certification. These were the critical distinctions between Western and Vedic astrology. Both have similar goals, but their approaches differ in some ways and require more complex definitions. But the advancement of humanity is the final factor in which both are equal.